Our Parenting World (OPW) team is one of the judges for this inaugural showdown event and as foodies, we are looking forward to try out the street food and support the chefs. Who will win? The event is hosted by Pornsak Sukhumvit aka Chua En Lai who spiced up the showdown with his humour. The 1st round is between Chef Lorenz Hoja from RWS’s L’Atelier de Joël Robuchon (Two Michelin Stars) and Thai Chef Aom Pongmorn from Bangkok’s revered ‘King of Phad Thai’ restaurant Baan Phadtha in cooking the best Phad Thai. The 2 chefs have 10 minutes to whip up the dishes. This dish on the left is from Chef Lorenz Hoja and the right is prepared by Thai Chef Aom Pongmorn. The winner is Chef Lorenz Hoja! 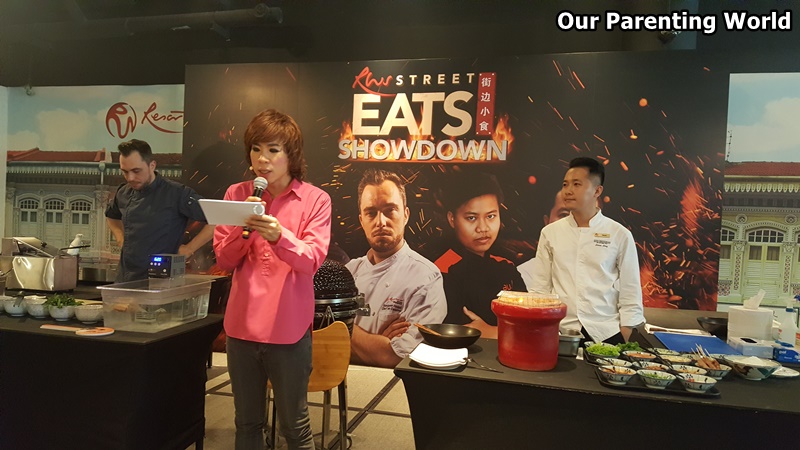 The 2nd round which is the final round is between Chef Benjamin Halat from CURATE and Chef Steven Long of Hanoi’s Sen Tay Ho on coming up with the best Vietnamese Grilled Pork with Rice Noodles. This delightful and unique version is prepared by Chef Benjamin Halat. This dish is beautifully presented in a boat prepared by Chef Steven Long. Both dishes are visually appealing and delicious, it is so hard to decide, who will win? The winner is Chef Steven Long! Congratulations to all the Chefs! We thoroughly enjoyed your fabulous dishes! It is nice meeting Chua En Lai! We enjoyed watching you on The Noose! 🙂

Come down to RWS and enjoy your favourite Southeast Asian Street food all under one roof at RWS Street Eats. Look forward to indulge in 20 Popular Street Food from 5 Southeast Asian Countries for a limited period!

Price: Admission is free, and dishes are priced from S$4 onwards To find out more, please go to www.rwsentosa.com/streeteats

Kick back and relax at the Beer Garden, with live music performances and open mic sessions on weekend evenings. Not to be missed are the pop-up booths along the Waterfront Promenade as more food and retail therapy await. Durian lovers, be sure to drop by the Tropical Zone to whet your cravings! All the above images credit to Resorts World Sentosa

Two accomplished RWS chefs have thrown down the gauntlet and challenged two renowned experts in cooking a better version of their famous national dishes at the ultimate RWS Street Eats Showdown on Saturday, 12 August.

Our Parenting World is honoured to be the judge in the first-ever epic battle between RWS fine-dining Western chefs and some of the best cooks from Southeast Asia!

Who will win? Please stay tuned to our update.

These challenges will be hosted and moderated by honorary “peace-keeper” Pornsak Sukhumvit (entertainer and celebrity Chua Enlai in his Thai character from TV comedy, The Noose).

Watch what the four chefs have to say at : www.instagram.com/rwsentosa/

Members of the public are invited to pre-register at www.rwsentosa.com/streeteats to stand a chance to taste their food and join as a judge at the event!

Price: Admission is free, and dishes are priced from S$4 onwards – but enjoy more in return when you purchase an Early Bird Bundle below.

8 x Event Food Vouchers (worth S$4 each)
1 x Complimentary can of Coca-Cola (option to top up S$4 for a Tiger Beer)
Gift Vouchers from OSIM, SodaStream and Naiise worth more than S$40