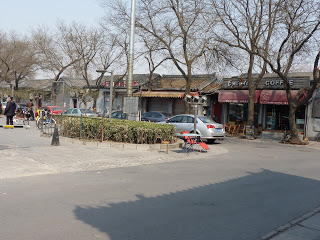 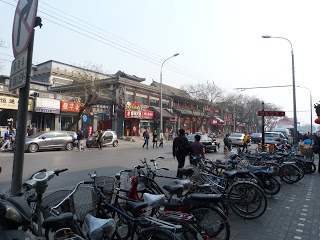 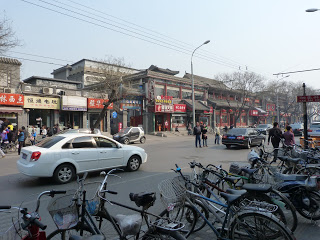 The burstling and vibrant streets around Gulou and Zhonglou. 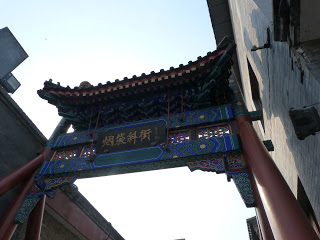 Our tourist guide brought us to Skewed Tobacco Pouch Street 烟袋斜街, the above picture is the landmark of the street.
The skewed tobacco pouch street is one of the most famous streets in Beijing. It measures 254 yards long connecting Di’anmen Street at the east end and the junction of Xiaoshibei and Ya’er hutongs at the west end. Like a tobacco pouch, the street goes from north-east to south-west, which gives its name – the Skewed Tobacco Pouch Street.
Originally in Qing Dynasty (1644 – 1911), this street was called the Skewed Drum Tower Street. At that time, local residents were addicted smoking opium. The increasing demand of pipes encouraged the opening of many pipe shops on the street. The shops had similar symbols – a wooden smoke pipe with a black pipe stem and a golden pipe bowl.
Today, many different kinds of bars, tea houses, coffee rooms and souvenir shops have mushroomed on the street. At night, the street is ablaze with lights, giving a homely atmosphere as you stroll around.
Share. Twitter Facebook Pinterest LinkedIn Tumblr Email