Gor Gor is invited to his friend’s birthday party at Children’s Technology World at Forum The Shopping Mall. Entrance of the shop 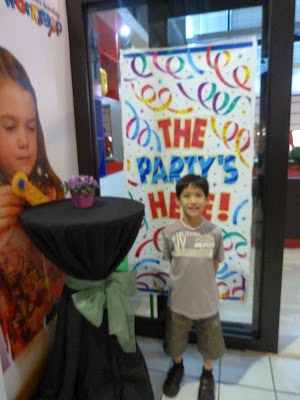 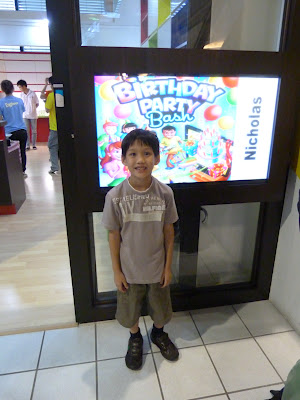 Gor Gor posing at the entrance.
We are not able to go in with Gor Gor as the children will be ushered into the room for the activities. Gor Gor told us that they were formed into a group of two to build lego pieces. The theme for the birthday party is to build a Medieval Castle. Taken from it’s website: “Children’s Technology Workshop™ (CTWorkshop) is an education centre focused on developing and delivering applied-technology curricula to children aged 4-12. It was founded in 1997 in Canada and since then, we have developed applied-technology curricula for children in both academic and non-academic settings. Our team comprised of educators, scientists, engineers and technology professionals, is passionate about teaching children technological concepts through hands-on activities.”

So what did we do while waiting for Gor Gor …

Before going for the party, Di Di tried sitting on the mechanical toy car with Gor Gor by his side. While waiting for Gor Gor, Di Di wants to sit the car again. 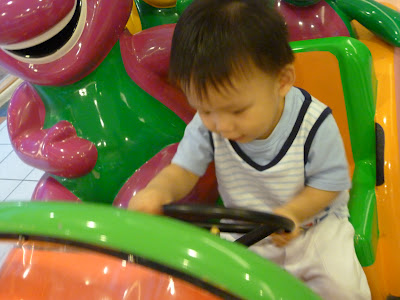 Di Di is becoming really good at this. Not forgetting to say “Hi” to Barney and friends while driving. Where do you want to go Barney? I can bring you there, I am really good at driving.
After Di Di finished his driving, we went to a cafe to have some light meal and chit chat with other Mummies and Daddies who are also waiting for their children at Nicholas’s party.
Gor Gor said that he has a lot of fun building the toys with his friends and celebrating his friend’s birthday. They are all given a goody bag and a certificate.

Thank you and Happy Birthday Nicholas!