This Christmas season, A Universal Christmas returns to Universal Studios Singapore (USS), bringing a dazzling Christmas extravaganza to guests from now to 2 January 2023. Enjoy and celebrate the year-end festivities with an epic Christmas spectacle at USS! 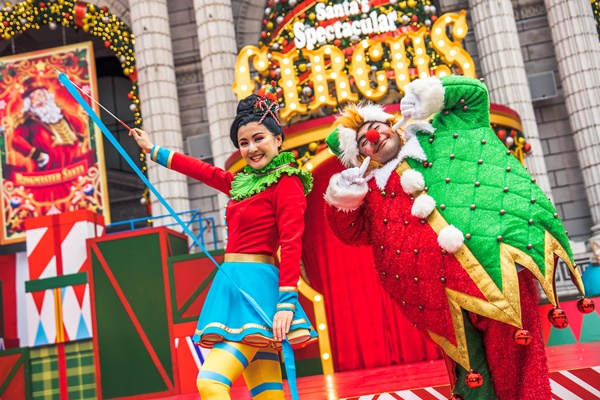 Here’s the highlights of what to expect at A Universal Christmas at Universal Studios Singapore as follows:

Santa’s Circus Extravaganza
Watch the night light up at New York with Santa’s Circus Extravaganza. A grand yuletide performance awaits with floats, magical moments and an eclectic ensemble of more than 40 performers led by Ringmaster Santa as they make their way to Santa’s Big Top. Joining in on the fun are Illumination’s Minions, DreamWorks Animation’s Po, Tigress, Poppy, Branch and Guy Diamond, as well as other fan-favourite characters. The parade culminates in a spectacular show with thrilling acts from all over the North Pole and a magnificent snowfall. Don’t miss this once-a-night extravaganza from 30 November 2022!

Gingy’s Sweet Meet and Greet
Catch Gingy the Gingerbread Man from DreamWorks Animation’s Shrek in an all-new appearance at Universal Studios Singapore. Chat and joke with Gingy at this interactive session as he helps Pastry Pat set up a new bakery for Christmas treats. Snap photos with the duo at Far Far Away’s Milk Bar Stage. Sing along with Santa’s Starlets as they set Mel’s Diner Stage ablaze with Christmas tunes while competing to be Santa’s next star. Cheer for your favourite act: the daring dancing of Polly The Polar Bear Princess, The Christmas Ribbon Extraordinaire by Ruby, or the stunning Festive Flame Lighter of Farrah.

Capture Insta-worthy memoriesin Let it Snow with Santa, his Snowgirls and the fun and silly Snowmen, all while experiencing a magical snowfall.

Meet Santa’s Superstars of the Circus in Festive Circus Acts. Witness amazing tricks by Unicyclist Elf, Peppermint Plate Spinner, the stilt-walking Toy Soldier and more as they showcase their sideshow acts throughout the day.

Guests are in for a merry challenge with fun-filled games at the Jolly Game Booths. They can put their throwing skills to the test at three carnival challenges and stand to walk away with attractive prizes. Knock down blocks at Blockbuster, score a Rebound or play a special version of Basketball. For some Christmas shopping, look no further than Merry Merchandise, with exclusive gifts featuring Sesame Street friends, Hello Kitty and other favourite stars. Round up the festive experience with Santa’s Wonderful Treats, including delightful desserts, plates of meaty pleasure and more. In addition, guests can continue to enjoy the adrenaline-infused rides, world-class attractions and
entertainment in the theme park. More information can be found at
http://www.rwsentosa.com/universal-christmas.

All the images credit to Universal Studios Singapore