Ho ho ho … its the time of the year to celebrate Christmas! Get ready to immerse in A Universal Christmas like no other at Universal Studios Singapore! From the festive decorations of twinkling lights and holiday displays, seeing your favourite characters being decked in Christmas outfits. Visitors can look forward to join Santa on his snowy sleigh ride, explore the dazzling World of Stars, catch Sesame Street friends in an all-new Oscar’s Grouchmas show, take part in an interactive Santa’s Workshop, and many more activities! Come up close and personal with the toys soldiers at USS.

What’s more, the park hours have been extended till 9pm every night for visitors to have more time to have fun soaking in Christmas mood and magic.

Highlights at A Universal Christmas, Universal Studios Singapore include the following: Watch “Under The Mistletoe starring Marilyn Monroe and Betty Boop” as the two stars bring their signature Hollywood glamour with a medley of Christmas hits during the day.

During the night, Airy Fairy swishes her magical wand to light up the streets of New York, setting the stage for the “Search for a Christmas Star”. This new, all-singing, all-dancing show features whimsical characters and exciting performances combining aerial acrobatics, special effects, snowfall and state-ofthe-art projection mapping at the New York Public Library for a truly memorable nighttime spectacle. Everyone gets excited when Santa Claus and his reindeers arrived in a parade as they bring in snowfall and Christmas greetings along the streets of New York. Sing and dance along with Santa Claus and his friends!

Join in the parade with the marching band, elves and toy soldiers for a festive photo moment set against a glistening 15m-tall Santa’s Christmas Tree House at Hollywood Lagoon. Check out the Hollywood zone where you can catch the antics of favourite characters such as Charlie Chaplin, Gru and the adorable Minions from Despicable Me where they will all be in Christmas gears. Look forward to catch the brand-new production called “Oscar’s Grouchmas”! This musical follows the story of Oscar, as he transforms from a Christmas grouch to the holiday’s number one fan through an unexpected journey where he discovered the true meaning of the season and the joys of giving, kindness and love. Sesame Street friends Elmo, Cookie Monster and more will delight audiences in this warm-spirited musical. This is a new immersive Christmas experience at A Universal Christmas, Universal Studios Singapore that you should not miss! Visit the Santa’s Workshop and join in the recruit to be an elf! Santa, the jolly man is recruiting hard-working elves to help him prepare for the holiday season! Join in to be a recruit and help Santa Claus, to be a recruit, you have to sign up first by filling up your name. The friendly elves will be around to help you make your registration an ease and fun! Once the registration is completed, you will be taken on a journey to finish all the tasks at various thematic zones. The Lead Elf will conduct a briefing and guide you towards the completion of all the task in order to be qualified as an elf. Help the elves look for the missing letter at the Mail Room brimming with Christmas letters and wish lists, upon completion you will get a stamp. 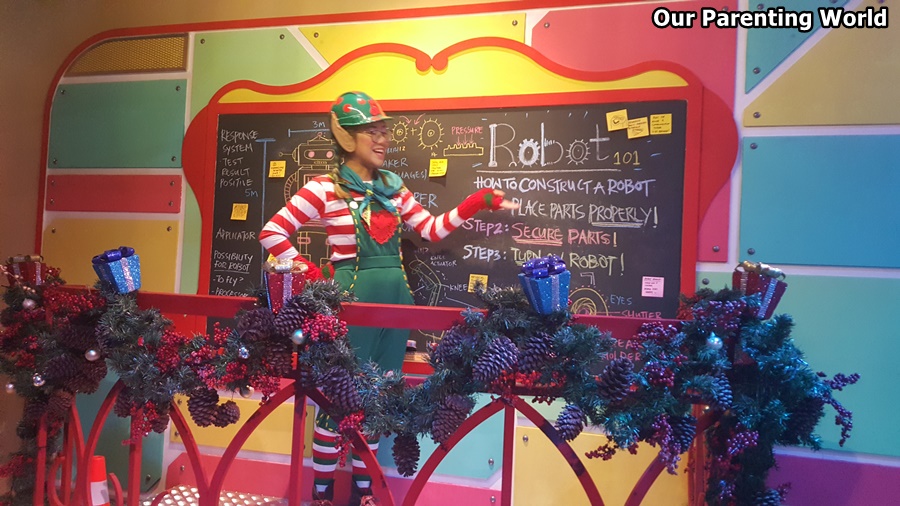 Robot 101 – Learn how to construct a Robot 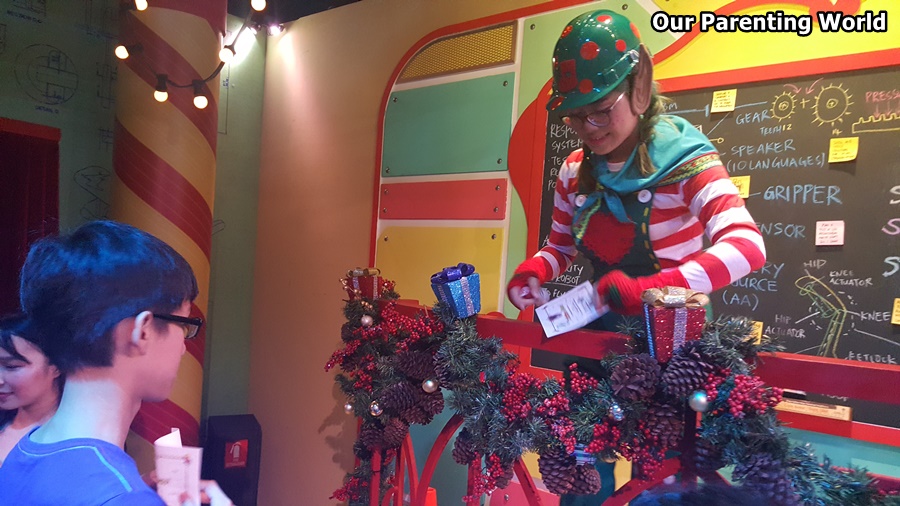 Upon completion, you will earn a stamp on your elf certificate. Go to the bustling Toy Factory where toys are being assembled, help the elf to assemble the robot. Santa’s Workshop makes anything and everything associated with Christmas and don’t forget to take pictures with Christmas decorations and giant toys! We arrived at Mrs Claus’ Kitchen, scrumptious smells from her baking greeted us! Mrs Claus need our help to find the missing items in her kitchen.

No problem, Mrs Claus, we will help you look for them! Mrs Claus is so happy that all her missing items have been found. All of us earn a stamp from her. 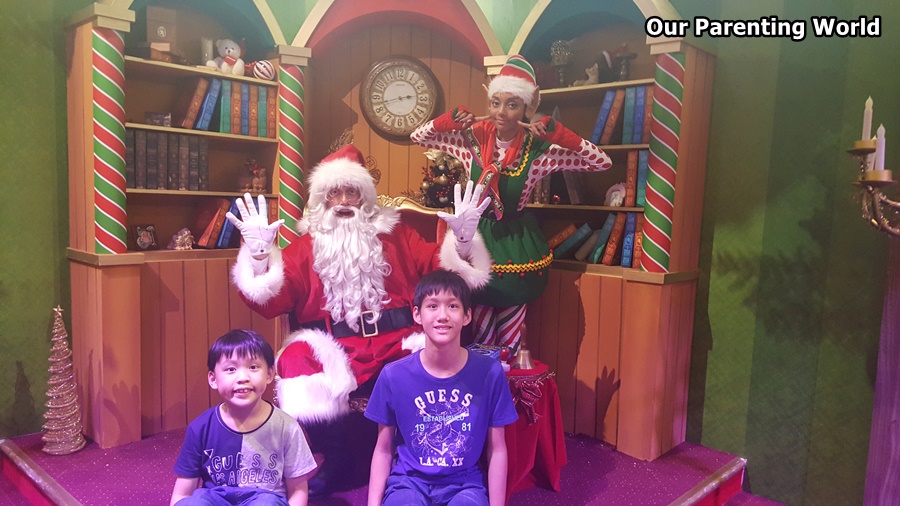 Ho ho ho … its Santa Claus! Everyone gets to take a picture with Santa Claus and his friendly elf!

Collect all 5 stamps upon completing all the tasks at Santa’s Workshop, you have now successfully completed your training to be an elf and a certificate will be awarded to you!

Celebrate Christmas like no other at A Universal Christmas at Universal Studios Singapore. Don’t miss the opportunity to join in the all-new Santa’s Workshop and many more fun Christmas activities await for you and your family at Singapore’s favourite theme park!

Christmas at Universal Studios Singapore, visitors participate in the yuletide celebrations at various zones in the theme park. Guests can sing along to familiar tunes at Mel’s Rockin’ Christmas show, or put on those boogie shoes and dance along Madagascar’s zoosters Alex and Gloria at King Julien’s Tropical Christmas Party. Over at Far Far Away, join Puss in Boots in the Dance for the Magic Christmas Beans for an eggsclusive meet and greet with Humpty Dumpty. For Christmas with a slightly spooky twist, flock to Sting Alley and meet Beetlejuice who is out to wreck Christmas!

This year, Universal Studios Singapore makes Christmas shopping easier than ever. Guests can shop this year’s hottest gifts at any of the park’s retail stores and with every S$100 nett spent*, they can have their gifts mailed straight to their loved ones for free with the North Pole Postage Service located along Hollywood.

*One (1) free postage applicable to a Singapore address only, with every S$100 nett spent

A Universal Christmas is included with regular admission to Universal Studios Singapore. Singapore residents enjoy discounts on admission at only S$72 for an adult one-day ticket (U.P. S$76), along with a complimentary S$5 retail voucher**.

Guests who wish to enter the park after 5pm to experience the festivities enjoy discounted admission at S$55 (adult), S$50 (child) and S$98 (1 adult & 1 child). For more information visit www.universalchristmas.sg