Trending
Daddy says:
Some of you may have read yesterday’s newspaper on this story below that students in China are resorting to intravenous drips to prepare for exam.
This is certainly ridiculous and I hope nobody in Singapore will resort to this. Intravenous drips have its use in the hospitals, as a form of hydration for patients who are severely dehydrated or for antibiotics infusion for patients who have severe infections. It certainly has no place in “boosting” the students energy level.
Furthermore, intravenous infusion has its own problems, as it may introduce infections to the body and it should generally be done in the clean hospital environment and not in the classroom setting, This is certainly dangerous.
How can we prepare our child for exam better, you may ask? Well, it is actually quite simple, just follow the following steps below:
1. Sufficient rest and sleep before exam. If your child do not have enough sleep, he will be sleepy and not able to focus well during exam.
2. Go outdoors and breathe fresh air in the morning, and go for a walk in the evening. Play some games (but not too much) before dinner to keep the mind and body healthy.
3. Drink lots of water to hydrate himself
These will be better than the intravenous “booster” these China students are getting below.
China students on intravenous drips for exams
(AFP)–1 day ago
BEIJING — Students in central China have resorted to classroom intravenous drips as a study aid to prepare for the nation’s notoriously difficult college entrance exams, state press said Tuesday.
Photos showing students at Xiaogang high school in Hubei province hooked up to hanging bottles of amino acids have gone viral on the web, eliciting shocked concern over how far Chinese students will go to get into university.
According to school official Gao Pingqiang, the pre-exam injection has become popular with the students as it has no harmful health effects and helps the students relax, the China Daily reported.
“The school will not suspend the injection and we will continue if students want it,” the paper quoted Gao as saying.
Another school official told the paper the amino acids in the drip improved the physical condition of the students and boosted their energy levels.
Many in China’s population of over 1.3 billion people have long viewed the June college entrance exams as a make-or-break test that can determine future careers and life paths.
The China Daily reported the government is investigating the intravenous drips, citing experts as saying such injections are unnecessary and could lead to infection.
Online bloggers were largely critical of the practise.
“The group intravenous medication by students does not mean the students are sick, it means that society is sick,” said one posting on Sina Weibo, a Twitter-like microblog.
“This is just another act to cheat people, it is incredible that the school lacks basic knowledge, you know for sure that someone behind the scenes is making money from this,” said another microblogger. 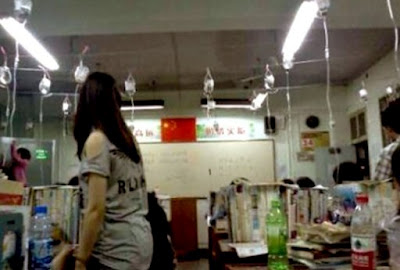