Gor Gor has been looking forward to this meaningful event over the March school holidays ever since he knew he will be spending the night with Dinosaurs. Wow! He is so excited as Dinosaurs is his all time favourite! For the first time ever, ArtScience Museum at Marina Bay Sands introduces ‘Dinosnores’, A Sleepover with the Dinosaurs’ where parents and children age between 6 to 12 years old can do sleepover together at the museum. It is great for family bonding too over such a meaningful and unforgettable event. ArtScience Museum conducted a series of interactive tours and workshops to keep the children excited and entertained. After registration, they were brought to a guided tour of the exhibition. Look how attentive the kids were during the tour! 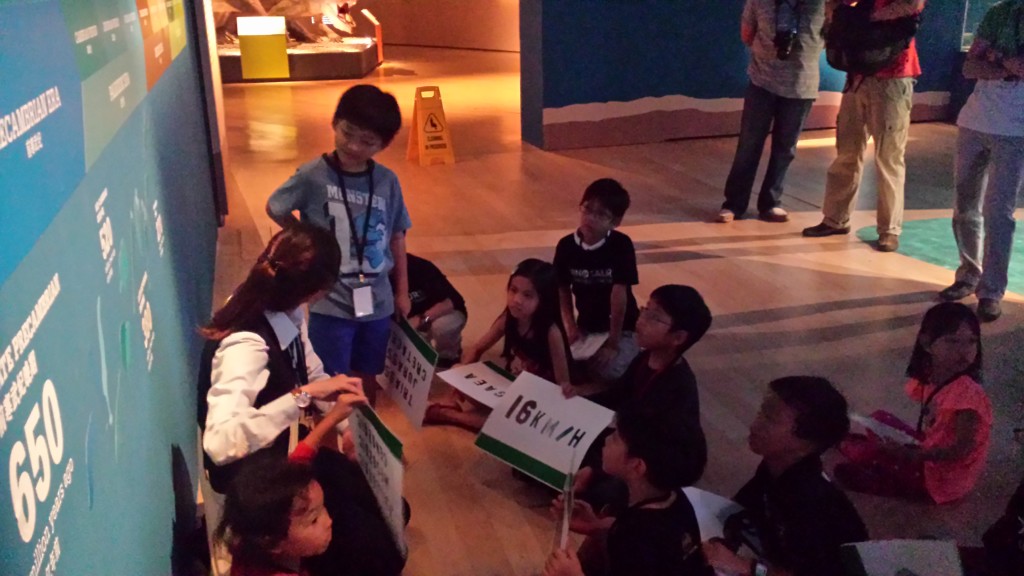 Children get to carry large flash cards with cue words during the guided tour that will help them to learn more about the exhibition. Gor Gor having fun doing the flash cards with his friends. 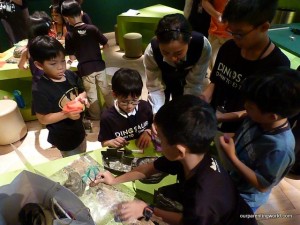 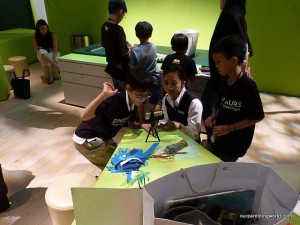 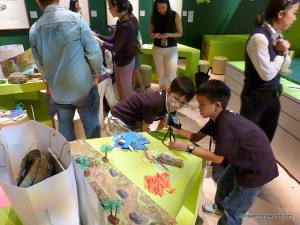 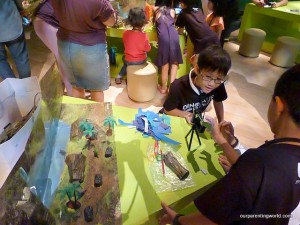 After a sumptuous dinner which consisted of sandwiches, chicken sausages. fried rice, chips, fruits,  juices and drinks. The children get together to learn and take part in stop-motion animation : Dinosaurs Wipe Out!

The workshop took place at the Creatosaurus Space and under the guidance of their helpful instructors, the children worked in groups and had fun doing their own animation which was based on one of the theories of dinosaur extinction. They get to use a variety of toys, props and materials to create their very own animation. For most children, it was the first time they get to do animation!

That’s not all, the night didn’t end here. Everyone was treated to a movie in Expression Gallery: ‘Night at the Museum’ How appropriate the movie was as they were all spending the night at the museum. The colourful bean bags were so comfortable. Gor Gor enjoyed watching the movie, snacks and drinks were provided if you wanted something to munch while watching the movie. How thoughtful of the museum! Lights out and its’ bedtime! We were told to bring our own sleeping bags or mats however pillows and blankets were provided.

Gor Gor’s snoozing time with the Dinosaurs around him. Gor Gor said the bed was so comfortable that he fell asleep in no time. Wakie, wakie … we started the day by folding up our blankets and belongings, washing up and proceed to have breakfast. Yum yum … the breakfast consisted of croissants, muffins, fruits, juices and drinks besides coffee and tea, it has my favourite, Milo. We started doing our first activity which was Shadow Puppets Alive! Look who’s here! Di Di joined Gor Gor in the morning as he is below 6 years old, he couldn’t take part in the sleepover. Although Di Di is young, he is never too young to know about Dinosaurs. Like Gor Gor, Dinosaurs are also Di Di’s all time favourite. He was so happy to visit the museum and attend the workshops. Do you like the Dinosaurs puppets that we made? 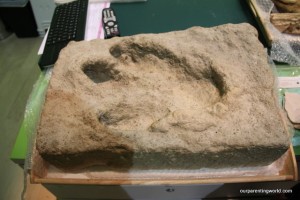 Next workshop on “A Day In The Life Of A Paleontologist”. 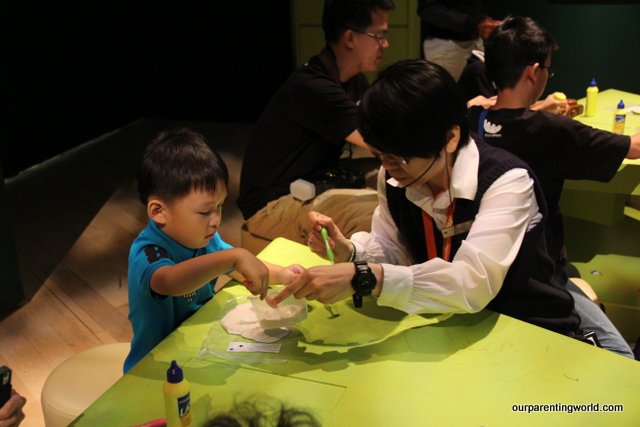 At this workshop, children get to handle the tools, learn and identify the fossils. Both Gor Gor and Di Di working hard to be a good Paleontologist under the guidance of the museum’s friendly and helpful instructors. They get to make a plaster cast of a dinosaur’s footprint and bring home at the end of the workshop.

After this workshop, it’s good-bye to everyone and you may wish to visit Dinosaurs: Dawn to Extinction exhibition again. Gor Gor and Di Di visited the exhibition again and being Dinosaurs’ fans, they always want to see more and are never tired of it. There is a free app called “ArtScience Museum: Dinosaurs Dawn to Extinction” for you to download onto your smartphone to personalise your dinosaur experience for different parts of the exhibition. Gor Gor and Di Di had been walking round the exhibition playing with the app.

The app also feature a mini game called “Rex Race” which you are able to race your virtual dinosaurs to the museum in the shortest time. Gor Gor and Di Di spend some time looking at the stunning displays of The Liaoning Forest section of the exhibition where 130 millions years ago, dinosaurs, fish, birds and other animals lived together in this forest. Gor Gor and Di Di enjoyed their trip to the museum tremendously and they will be back visiting the dinosaurs again!