How much food did you throw away yesterday? It may not be much, but it contributes to Singapore’s food waste problem, which hit a high of 809,800 tonnes in 2017.

Households have been cited as a major source of food waste. A household waste study by the National Environment Agency (NEA) found that food waste accounted for half of the total waste disposed by households, as people throw out daily leftovers from eating and cooking. Electrolux tackles this issue with the launch of the Social Food Swap, calling on the community to consciously reduce Singapore’s food waste by just 200g per week, through the simple action of swapping food items and ingredients. 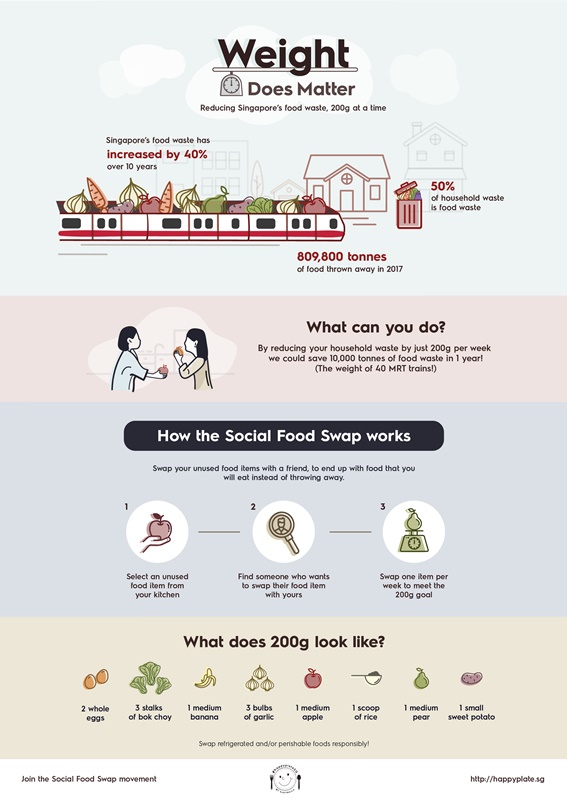 A nation of wasteful households

“Food waste is a very real problem in Singapore. In 2017, we disposed more than 809 million kilogrammes of food waste and only 16% of it was recycled. The lack of a good food waste management system will result in stresses on our nation’s food security,” said Pek Hai Lin, Manager of Zero Waste Singapore. “But while people are generally aware that they should not waste food, unfortunately little action is taken to do anything about it. It’s time to sit up and actively change our lifestyle habits in order to reduce our wastage.”

Social Food Swap: A shift from “binning it” to “swapping it”

Food waste is often generated when home cooks buy ingredients in bulk from grocery stores and are left with excess ingredients after cooking. These are eventually thrown away. The Social Food Swap addresses this issue by encouraging people to swap their unused ingredients with family, friends or colleagues, instead of “binning” it. This could potentially reduce food waste by 10,000 tonnes in one year, the equivalent to the weight of over 40 MRT trains.

From food delivery to infant schools, companies across Singapore are committing to hosting their own Social Food Swaps. “We are delighted to support this initiative. Deliveroo is passionate about food and doesn’t want to see any go to waste. This important initiative will not only cut waste, but will help people to be more creative in their cooking habits. All of us at Deliveroo are excited about taking part,” said Siddharth Shanker, General Manager, Deliveroo Singapore. Electrolux is working with a number of organisations, including the likes of global brands Deliveroo, OPPO and TripAdvisor to tackle the important issue of food waste, 200g at a time.

Electrolux Chef Ambassador for community initiatives, Eric Low (Chef E), says, “There are many perfectly edible food items such as canned foods, vegetables, condiments and fruits that end up in the trash simply because people have no need for them after finishing a recipe. We hope that this movement continues growing as people realise that reducing household food waste is as simple as swapping food with someone else!”

Social Food Swap is part of HappyPlateSG, a community program by Electrolux to reduce food waste in Singapore. Started in 2015, HappyPlateSG focuses on educating the public and encouraging small and tangible actions that add up to a big difference in reducing food waste.