What will we see and what challenges will we face?

Join us in this spooky adventure as we entered into S.E.A. Aquarium to find out what lies ahead for us … At the entrance, we were given a bag which contained a map “Quest for the Hidden Treasure” to begin our Spooky Seas Trail. We were told that the best treats are hidden in a treasure chest within a haunted shipwreck which is ruled by the evil skeleton pirates and they have kept even the bravest divers at bay. Using the map as a guide, we must use our wits to uncover the chilling truths about the marine animals and unlock these secret treats. At the same time, observe the pumpkins turn into lanterns under the sea. Grasp! Chill ran down our spines as we made our way to the Fishy Graveyard which is the the first of the five station that we need to complete according to our map. At each station, we have to complete a task using our wit and speed, solve the questions, do the puzzles in order to pick up the treats, collect all the ingredients needed to concoct a magic potion in order to create a spell to unlock the shipwreck treasure chest. The Fishy Graveyard is so spooky and guarded by The Grim Reaper. Our first task is to help Grim Reaper who has lost his sight to label the 5 remains of the marine animals at the graveyard in order to exchange for our treat and receive the first ingredient to continue to our next task. 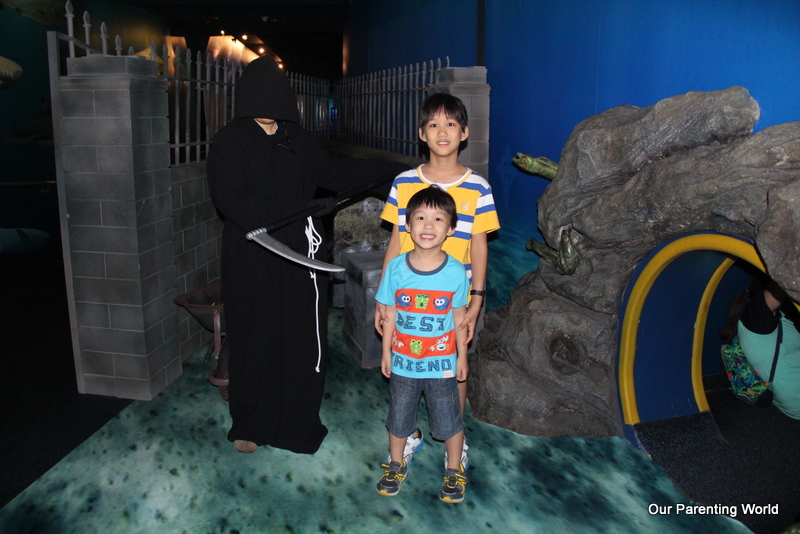 The boys completed the task as quickly and put on a brave front by smiling for the camera while keeping an eye on the Grim Reaper. At the second station, the boys met the Mad Scientist at his lab. Mad Scientist has gone crazy identifying so many specimens and he needs help to label the specimens. The boys quickly get down to work identifying the specimens and the Mad Scientist is so happy with their work, give them their rewards and also 2nd ingredient for the final spell. The boys quickly moved to the third station.

The little boy is so hungry that he wanted to eat the pumpkin without realising that these pumpkins are not the usual ones!!!

We are almost halfway through our mission at the third station, Pumpkin Patch. We have to help The Spooky Scarecrow to design the pumpkins before Halloween as he has thousands of them and as a reward, he will give us a treat and the third ingredient for the final spell. 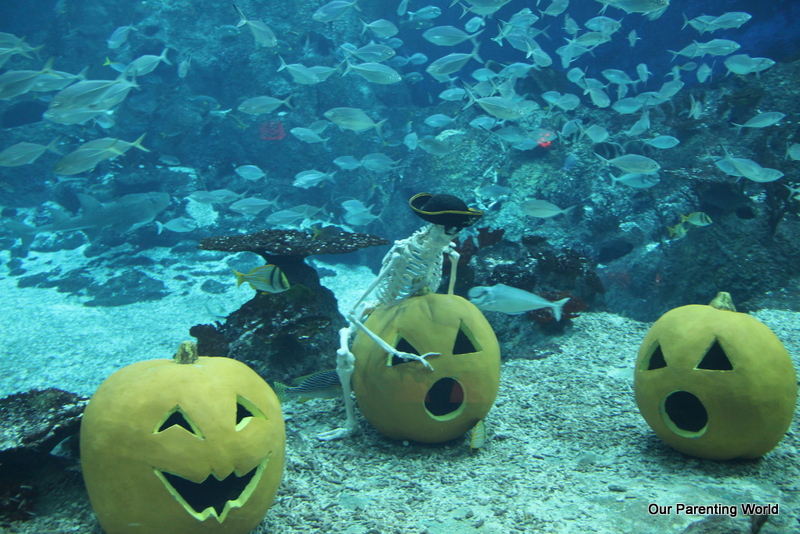 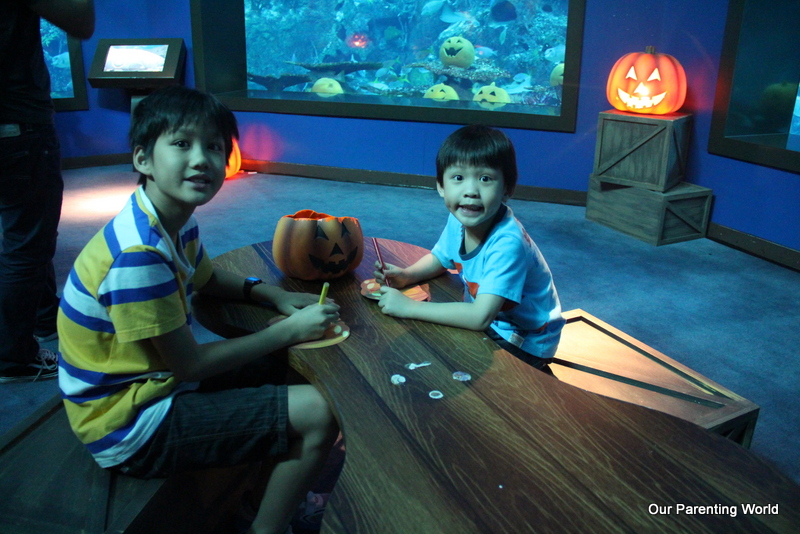 The boys diligently get down to work on designing the pumpkins to help The Spooky Scarecrow and he is so happy with the boys’ work that he proceed to give them the reward and the third ingredient for the final spell for them to move on to the next station. We are at the Vampire’s Lair, the fourth station. Vampires love to drink blood and he is sucking friends over for dinner, we are mustering our courage to join Mr Vampire for dinner. The boys are so relieved to know that all Mr Vampire wants is for them to label the challices on the table on whose blood will he be serving on the dinner table? The boys get down on their task and Mr Vampire is so pleased that he gave them treats and the fourth ingredient for the final spell. S.E.A. Aquarium is the home to more than 100,000 marine animals of over 800 species, across into 49 different habitats. The boys also look at their favourite marine creatures/animals like jellyfish, sharks, stingrays and many more and explore the touch pool while completing their quest. At the fifth and final station known as Potion Parlour, now that we have collected all the four ingredients from the earlier four stations, we have to find out the last four spell ingredients at the Potion Parlour. Show our final recipe to the loopy portion master so that he can create the spell to unlock the chest. Yay, we have completed our quest and concoct a magic potion to unlock the chest to release a surprise!

Don’t forget to collect your scroll of achievement and be back at S.E.A. Aquarium for Merry Fishmas with Christmas themed scavanger hunt starting from 1 December 2015. We are so happy that we have completed our quest, collect lots of treats in the five stations, our scroll and reward. We have such a fun and enjoyable time!

Visit Spooky Sea at S.E.A. Aquarium from 1 October to 15 November 2015 with your family and friends to have spooky fun and embark on a quest to search for the hidden treasure.

They are the guardians of the forgotten sea depths, rising from the darkness only during Halloween. Feel the chills as they swim by, and don’t forget to capture evidence of their rare appearance.

Come say hi and take plenty of pictures with our Manta Ray mascot. He will be “swimming” by at these times daily:

You may have seen pumpkin carving demonstrations. But have you seen it done while submerged under water? Come witness this feat as our divers carve pumpkins into Halloween lanterns from inside our Open Ocean Habitat.

Win one of five stays at Hard Rock Hotel® Singapore!