Roselle tea, one of the preferred Asian brews produces a luscious hue of pink when served and, is said to aid digestion. The popular fresh brew is now made conveniently available in a pack with an all-round natural authentic taste – the brand-new F&N NutriWell Roselle.

Roselle, commonly known as 洛神花 in Chinese, is a species from the Hibiscus family which is botanically known as Hibiscus sabdariffa. The species is found in the tropics and it is distinguished by its bright white to pale yellow flowers with a stout which becomes fleshy and bright red as the fruit matures. The calyx, prized for its flavour and is in the brewing of beverages, is a red pointed pod found on the Hibiscus which protects and supports the plant. Prepared by infusing the calyces of the Roselle flower in hot water, it yields a deep red colour and carries with it a tart, cranberry-like flavour.

Increasing health awareness among tea lovers has ignited a trend of consumption of floral teas such as the Roselle tea. Known for its nutritional properties, the Roselle plant contains polyphenols, flavonoids and anthocyanins, which are potent antioxidants, and is rich in organic acids, minerals, amino acids, and vitamin C3. The Roselle leaves and flowers are known to be used as tonic for digestive functions. Another interesting fact is that the plant is regarded as an aromatic, astringent and cooling herb which is commonly used in the tropics. When chilled, the beverage which does not contain sweeteners and added colouring makes the perfect accompaniment to any meal especially if it is a heavy one, and it is most refreshing when consumed chilled on a warm sunny day. 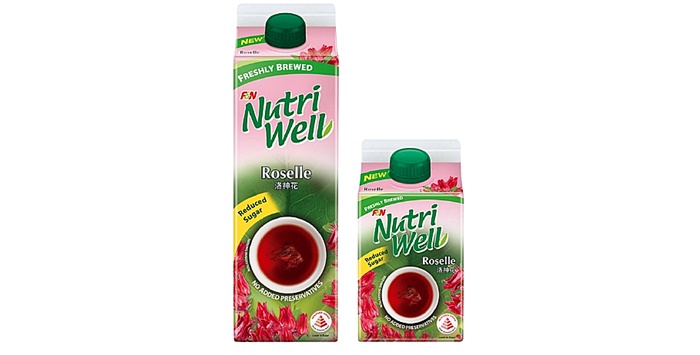 F&N NutriWell Roselle is available at most supermarkets, hypermarkets, and participating retails outlets with a Recommended Selling Price (RSP) of S$2.25 for 1-litre pack, and S$1.50 for 475ml pack. Containing no preservatives, the refreshing brew also carries the Healthier Choice Symbol by the Health Promotion Board (HPB).

For more information, please visit its website at www.nutriwell.com.sg