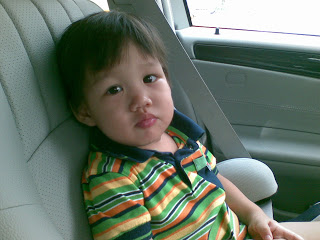 Happy 18 months!
Gor Gor has turned 18 months on the 22nd this month. He is getting more and more adorable and responsive as he grows up. In addition to the previous post on 8 April now he knows how to say a lot of words like:
1) Popo (Grandmother)
2) Gong Gong (Grandfather)
3) Papa
4) Mama
5) Jie Jie
6) Star
7) Moon
8) Plane
9) Bike
10) Bag
11) Fish
12) Tax (Taxi)
13) Tutu (pacifier)
14) Ball
15) Bug
16) Boat
17) Duck
18) Dog
19) Book
20) School
21) Egg
22) Car
23) Bus
24) Bird
25) Shoes
26) Up (when he goes up)
27) Bear
28) Nei nei (Milk)
29) Eat
30) House
31) Flats
32) Man
33) Cartoons
34) Chair
35) Bed
36) No
37) Ballon
38) Oh right
39) Gai gai (means going out)
40) Keys
41) Dragon
42) Bubble
43) Church
44) Goat
45) Red
46) Purple
47) 2,4,8,9,10. He knows when to say 2 after 1, 4 after 3 and 8,9, 10 after 7
48) Bye bye
49) Turtle
50) Tiger
Oh not forgetting, every day he will use the remote control and ask me to let him watch cartoons. He will point at the TV, give me the remote control and say cartoons… cartoons. If I am not around, he will ask whoever is around to turn to the cartoon channel for him. We happened to have that on cable TV as Uncle Raymond has subscribed to Cartoons Network.
Initially he called all moving vehicles, car, shortly he can tell which are the buses now he has moved on to differentiate which vehicles are taxi … he can’t say lorry and van, he will point at them and he knows those are not car. Oh, when we ask him to sit down and stand up, he will do so. He loves animals, he gets so excited seeing and playing with Puffy, our dog. He knows when he is inside the car, he will take off his shoes in case he dirties the seats, he will want to put his shoes on when we reached our destination. He is very good at listening to the engines and correctly name which engine sound is from car, bike, bus and plane.
The funniest thing is that when we asked him where’s cat, he will say meow, where is dog, he goes wo wo, where is car, he goes vroom vroom, where is plane, he will make noise like the plane’s engine. Where is train? He goes tu tu …
He knows how to point correctly at where is his hair, head, eyes (many times instead of pointing his eyes, he will wink or blink his eyes), nose, ears, mouth (instead of pointing, he will open and close his mouth), hands and legs. We ask him to dance, he will happily stamps his feet and goes round and round. Our favourite is asking him to show us where’s his belly button, sometimes he will go to his grandmother and show us her belly button instead. Haha …
He learns very fast for his age and his memory is very good, we just need to tell him once what is that, he can pick up immediately. I have begin to develop strategies to help him learn and stimulate him further.
He loves to go gai gai … he gets so excited when we say to him, go gai gai (means going out). Kids are full of surprises =)
He is really funny and he can be very mischievous. He likes to imitate my actions and when I shakes my head and say NO like when he played with water. He will follow my actions. I am so amused when I saw him shaking his head and following me. When I was eating, He would go to me with his spoon and try to feed me. He will say “mum mum” to me.
Most children start to call their fathers, Papa first and the word mummy especially “my” part is hard for them to pronounce so I decided to ask him to call me mama instead. He used to call me mummy as “maaa” but not often. Nowadays he kept calling me, “mamamama” all the time. Grandmother said baby is so sweet and mummy is so happy. Whenever I hear baby calling me mama, that’s one of the the sweetest word that I ever hear and I can do anything for him.
Share. Twitter Facebook Pinterest LinkedIn Tumblr Email