Income Eco Run 2017 was previously known as NTUC Income RUN 350, Organised by Young NTUC. It is an eco-friendly running event with the aim to raise awareness of the importance of everyone to play a part in conserving the environment. Income Eco Run 2017 is also a recognised as Southeast Asia’s premier eco-run. 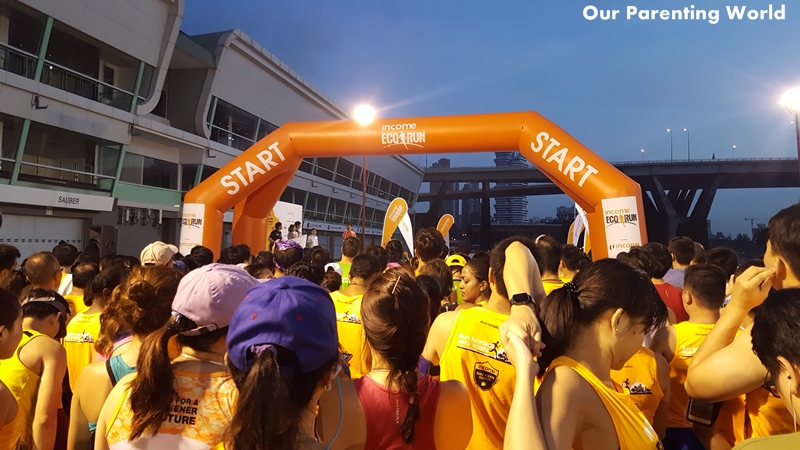 Our Parenting World team is all excited to wake up early in the morning and reach F1 Pit Building, Marina Promenade before 6.30am to participate in the 10Km run.

The runners will receive instead a handheld water bottle to refill along the race route to cut down on the use of disposable cups and a limited edition ‘Zero Waste’ graphic print on the running tee in recognition of their pledge.

There are several eco-friendly measures implemented in the earlier editions of the run and current one including giving out post-run e-certificates, producing finisher medals from recycled metal, using bio diesel fuel for the generators, encouraging runners to bring their own bottles (BYO) to reduce the use of plastic bottles and paper cups.

The running event also provided sorting cans for trash to be recycled and provided bicycle racks on race day to encourage participants to cycle to the Run.

Kids can participate in Income Eco Run 2017 800M KIDS DASH which included 4 to 8 years old will be running with parents and 9-12 years old can run without parents. After the children had completed their run, they are rewarded with a metal for their accomplishment! It is a fun and educating run! We are committed to conserve resources, reduce waste and do our part to save the environment!

We look forward to participate in next year Income Eco Run! To find out more about Income Eco Run 2017, please go to http://incomeecorun.sg/