If you love Music, Running and Fun which run offers all that, it has to be The Music Run!

Our Parenting World team has been sporty recently going for numerous run and one of the most unique one is The Music Run™ by AIA 2017 which was held yesterday. This year is the 3rd edition of the run which is bigger and bolder, well-regarded as the Ultimate 5KM Running and Music Festival. It was so popular and the run has attracted more than 10,000 runners! The Music Run was held at Palawan Green, Sentosa Island. Runners gathered around excitedly and can’t wait to participate in the running event when the gate opened at 3.30pm. In the meantime, runners can also enjoy endless of music and fitness inspired entertainment in the Music Village.

First, we had our warm up exercise near to the main stage of The Music Run before we started on our race. We proceeded to the starting point at 5pm and waited in batches for our turn to run. Runners will pass through a 5KM running course and across 5 different music zones which consisted of Pop, Rock, Old School, Hip Hop and Dance. Along the way there were more than 120 speakers that pumped out songs that were voted by the runners earlier. At each zone, you will find some really cool displays and photo opportunities were available. 1st KM featured the AIA Rock Highway which showcased a gigantic rock band display where everyone can be a rock star for the day. Most of the runners were dancing, swaying to the music and running all at the same time. We reached Old School zone! It is interesting for younger generation like me to listen to some really nice old school music. 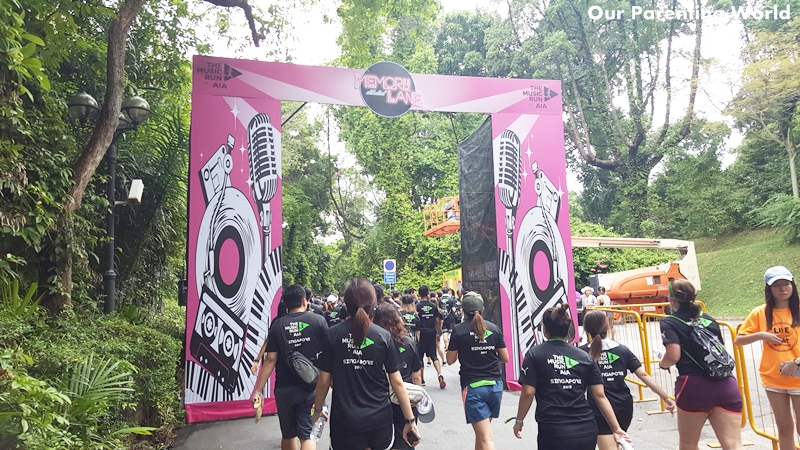 A trip down the memory lane with all the old school music being played. At AirAsia Hip Hop Alley, featuring the smoothest R&B and hip hop beats reside. The race course went through the Siloso Trail. This is the first time we get to run through the trail which is exciting for us. In the final KM, its dancing time! Runners get to dance and go high with electronic dance hits in the AIA Electric Avenue passing through a pop up disco tunnel. There was a also a live DJ in the air. Hello everybody! Let’s dance! Yay! Well done runners, we have reached the finished line! It has been a great run and even though its 5KM for the kids, they don’t feel it as they get to enjoy and immerse in different types of music at different zones. After the run, more fun activities continued, participants joined in the After Party featuring returning radio house DJ Sam Withers (Aus) who was a big hit in last year’s after-run event. He performed the hottest tunes of 2017 at the Ultimate Music Festival much to the delight of the runners.

Thank you The Music Run and we look forward to participate in next year run!

The Music Run™, a phenomenal and futuristic run, is an award-winning event that offers a unique total music immersion experience and has been making waves all over the world, including multiple sold-out events in Asia in 2016 and new tour dates announced in India, Europe and South Africa this year.

To find out more about The Music Run™, please go to: http://www.themusicrun.com/events/singapore