We are all Disney fans! The kids are so excited to know that Disney On Ice will be coming to Singapore that they simply can’t wait to catch the show. They love Disney characters and for the first time, they can see the popular Frozen characters come to live. The show started with Mickey Mouse and Minnie Mouse together with Donald Duck, Goofy and Disney On Ice Rock Stars introducing the characters from its hit Disney Fairy tales. The audience are thrilled to see them!

We are immediately transported to a magical world as the story unfolds with the famous Disney characters coming to live through lively music, colourful scenes, dazzling choreography and spectacular skating movements. Look out for the special effects like stunning acrobatics, aerial stunts, fireworks and snow. The first story is the lovely Princess Ariel from The Little Mermaid. Dive into the sea with her, join Sebastian, the faithful red Jamaican crab who watched over Ariel closely and Flounder, the bright yellow and blue colored tropical fish which is Ariel’s best friend together with the underwater sea creatures in this colourful magical story. 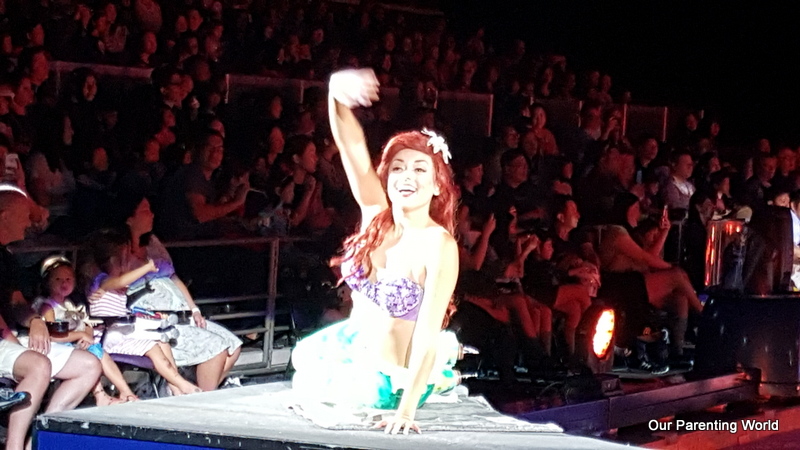 Audience get excited when the Disney characters come up close to them! Ariel is so beautiful! Second story is the beautiful Rapunzel, a princess with long golden hair from the movie Tangled, join Rapunzel in her adventure as she escaped from the tower where she was held in captivity with the help from her lover, Flynn Rider. Some memorable parts of the scene including the floating lanterns that were raised on Rapunzel’s birthday, the audience were in awe as it was a beautiful sight. Third story is Beauty and The Beast. We have watched both the animated film and Beauty and The Beast Broadway musical, we are never tired of this timeless beautiful romantic story of Belle and the Beast. Watching the characters skated on ice and performing this classic story to live with colourful songs, dances and flawless skating movements, it is a joy to watch. Final story is yes, Frozen! This is the moment that everyone is waiting for and when the familiar Frozen characters start to appear, you can hear excitement and cheers of delight from the audience. It shows how popular Frozen is! The adorable Olaf, the snowman performing one of his hit songs “In Summer” with skaters performing in cheery, bright and colourful costumes. It makes us feel like Summer already. Meet the famous sisters of Frozen, Anna and Elsa! The audience cheered and clapped upon seeing them. The audience are mesmerized and many are heard singing along when Elsa performed the very popular and famous song “Let It Go”.

During the Frozen segment, audience are so excited to see special effects like snow and we do feel like we are in Winter wonderland as we follow Anna, Elsa, Kristoff and Olaf in their adventure. This is definitely the show that is not to be missed!

March school holidays are here, watch the highly entertaining and spectacular Disney On Ice Presents Magical Ice Festival that is suitable for the whole family to spend an enjoyable and memorable time together!

Tickets for Disney On Ice presents Magical Ice Festival can be purchased online via www.sportshubtix.sg.