Singapore Toy, Game & Comic Convention (STGCC) was held from 10 – 11 September 2016 at the Sands Expo and Convention Centre much to the delight of visitors who were waiting for this once-in-a-lifetime fan experience!

Looking at the constant flow of people going into the venue shown how popular this exhibition was! When we stepped into the venue, it was like a toys and comics wonderland, we were dazzled with all kinds of toys, comics and their merchandises. It had such a wide range of brands, you will certainly find your favourite toys and superheroes here! At STGCC, you can find Hot Toys exclusive collectibles and including Iron Man Disco, Knightmare Batman and life-sized Cosbaby installations. Visitors can see the release of several Hot Toys exclusives by ActionCity, fans will have the opportunity to get these limited edition collectibles to their collections. 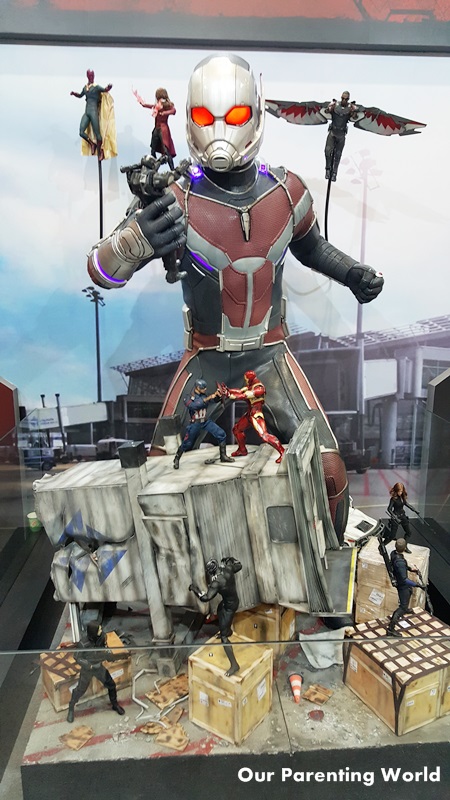 One of the best scenes from the recently released “Captain America: Civil War” where Team Captain Amercia battled against Team Iron Man. 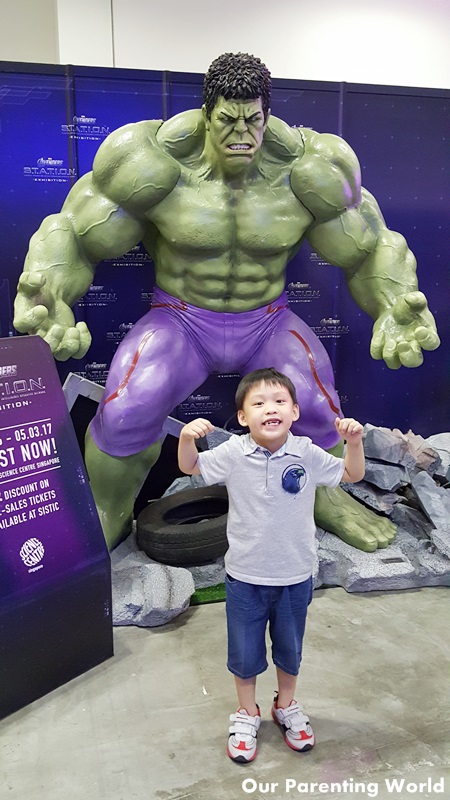 Nickelodeon Teenage Mutant Ninja Turtles is also one of the favourite hot toys at the convention. Transformers, a grand display of old transformers toys to the current ones. Awesome! At the convention, visitors were treated to a stunning display of Star Wars and learnt more about the manufacturing process of making these toys. 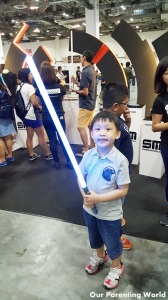 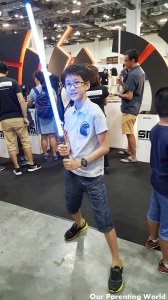 Visitors were able to try out and or buy these lightsabers. The lightsaber in Star Wars is a laser sword, which is a weapon used by the Jedi, Sith, and certain other beings, including other Force-sensitives. Coming up close with Star Wars, Kylo Ren and Stormtroopers. This year, Singapore Toy Game and Comic Convention 2016 was in its eight year held over last weekend at Singapore’s iconic Marina Bay Sands, the two-day convention was a huge success with expected turnout of more than 45,000 compared to last year figures.

Thanks for the spectacular show! We look forward to Singapore Toy Game and Comic Convention 2017!

Singapore Toy, Game & Comic Convention (STGCC) is getting ready for an exciting weekend from 10 – 11 September 2016 at the Sands Expo and Convention Centre.

Joining the power-packed guest list of STGCC is cult favourite Brooke Allen  who will be making her first STGCC appearance. Brooke is a comic book artist and toymaker based in Richmond, VA. Along with being the artist and co-creator of the Eisner and Harvey award-winning series Lumberjanes. The well-received comic book series breaks the mold with strong, fully fleshed-out female characters traditionally dominated by male characters and creators in the comic scene. She has also done covers and shorts for Adventure Time, Regular Show, Bravest Warriors and Power Puff Girls. Our Parenting World team is honoured to interview Brooke Allen to find out more about her:

1. What made you develop your interest in comics and toy making?

B: I’ve always been interested in cartoons and comics from an early age and it seems like I just never grew out of it! I love creating worlds, characters and stories so comics and toy making are a natural manifestation of that passion for world building. I knew I wanted to draw comics as a career when I was still in middle school (after picking up a copy of Chynna Clugston’s series “Blue Monday”) so I sought out an art school that had classes in Sequential Art and ended up going to Savannah College of Art and Design. After graduating and working at a honey store for a time I moved back home to North Carolina to help my parents with house renovations. It was during that time I was very isolated, most of my friends had moved to NYC or Chicago and I was pretty much unemployed and sinking into a depression. As a creative outlet I began creating figures of of my comic characters and eventually began producing small resin runs of them and posting them on Instagram. It’s from there I found many other artists making and collecting toys and suddenly I was aware of a whole new creative community. Creating toys got me out of my depression rut, connected me to other artists, and eventually led to getting comics work at Boom! Studios.

2. What can Singapore’s fans expect at your very first stage appearance at the Singapore Toy,Game and Comic Convention?

B: I’ll be doing signings, sketches, and selling books at the table as well as speaking on a couple panels about drawing monsters and all age comics.

3. Can you share with us more about the much acclaimed award winning series Lumberjanes.

B: It’s a lighthearted all ages comic that centers around five girl scouts having adventures, fighting monsters, and solving the mysteries of the camp and surrounding woods. It’s queer friendly, created by an all female team and focuses on female friendships. If you’re a fan of cartoons like Gravity Falls, Steven Universe, or Scooby Doo then you’ll probably enjoy Lumberjanes too!

4. How do you keep yourself recharged with creativity and what is your typical work routine like?

B: There’s not too many typical or routine days this year with all the travel I’ve been doing and different projects I’ve been juggling. If I’m home I usually start the day with my partner, walking the dogs and eating breakfast together, and depending on the whether or not I’m working with traditional media (ink and paint) or digital I may work in my studio at the desk or on the laptop, sometimes outside with my partner (who is also a freelancer) on the porch if the weathers nice. I always underestimate the amount of time it takes to respond to emails, answer interviews, or have skype and phone meetings. Rarely do I have a day where I’m not devoting a large chunk to administrative tasks. I usually don’t take a break until 7/7:30 to go for another walk with the dogs and eat dinner and then depending on how close I am to a deadline I either keep working until late in the evening or I call it quits and do something to decompress like read, watch a movie, or hang out with friends. I find if I’m working too heavily on comics I need another creative outlet to balance it like woodworking, sculpting toys, learning to sew, or just working on my moped. I also make a point to play volleyball at least once a week which is more or less an excuse to play in the sand.

5. Can you share some interesting or enjoyable observations/encounters you have experienced after Lumberjanes gained popularity?

B: I’ve had a lot of inspiring interactions with fans! It’s always surreal and especially humbling when a young person tells me they want to be a comic book artist one day and share their sketchbook with me. I remember one fan in particular who had just come back from camp and created their own badges with their friends, all of which were really punny and well drawn, including one for arm wrestling a bear called the “grin and bear it” badge. I’m also totally blown away by the cosplayers, particularly when families or whole friend groups come to signings in costume.

6. Do you have any upcoming projects and how can we be in touch with your works?

B: I have a few things yet to be announced but I’m currently working on a comic with Kevin Panetta ( Zodiac Starforce ) for the digital comics app Stēla as well as illustrating Chris Grabenstien’s new series of children’s chapter books for Random House Publishing called “Welcome to Wonderland” set to launch this October. You can keep up with my work on Instagram- Brooke_A_Allen, twitter- @brookeaallen, or over on Tumblr at www.brookeallen.tumblr.com.

7. What are some of the important lessons you have learnt in life – in and out of comics and toy making?

B: Don’t be afraid of failure. Never let that negative little voice inside your head stop you from making something because you think you can’t or you don’t think what you have made is perfect. It’s easy to let mistakes paralyze you from moving forward and growing, that’s something I struggle with especially. Do something creative every day, even if its something as mundane and seemingly noncreative as figuring out new, more interesting or productive ways to organize your business expenses or watch tutorials on how to dye and cast a different type of resin, as long as you’re learning and exercising your skills you’re moving forward and that’s what matters. And finally, celebrate life, your loves ones, and yourself as much as possible because good mental health and happiness is just as important as physical health.

8. What do you feel is required to be a comic book artist and toymaker for the benefit of those who consider you to be a role model?

B: I think adaptability and a drive to create and tell stories is essential. It helps to have a good head for business (or know someone who does). Always know your self worth and learn to say ‘no’ to jobs that aren’t worth the effort or time. As a freelancer there’s always that pressure to take any job on offer for the fear that you’ll run out of work, but realistically you can only handle one or two jobs at a time and you’ll want to make sure they’re something you enjoy or at least pay well, otherwise you run the risk of burn out (and burn out benefits no one).

B: Thank you so much for taking the time to read my rambling answers and opinions on comics, I hope it was insightful if not entertaining. To fans of the comic thank you so much for the support and for those not familiar with it yet, if you do end up picking up a copy of Lumberjanes, I hope you enjoy it and share it with any adventure loving youngsters in your life.

Thank you Brooke Allen for taking our interview! Brooke Allen will be making her first appearance at the Singapore Toy, Game & Comic Convention (STGCC) on the 10 and 11 September, at the Sands Expo and Convention Centre, Level B2, Halls E and F.

* Article brought to you by Shobana N, Senior Writer and Our Parenting World (OPW) Team.