Many of us have heard of and are familiar with the above song coming from the iconic movie ‘Singin’ In The Rain’ starring Gene Kelly and Debbie Reynolds. Over the years, it has been regarded as one of the best musicals ever made. 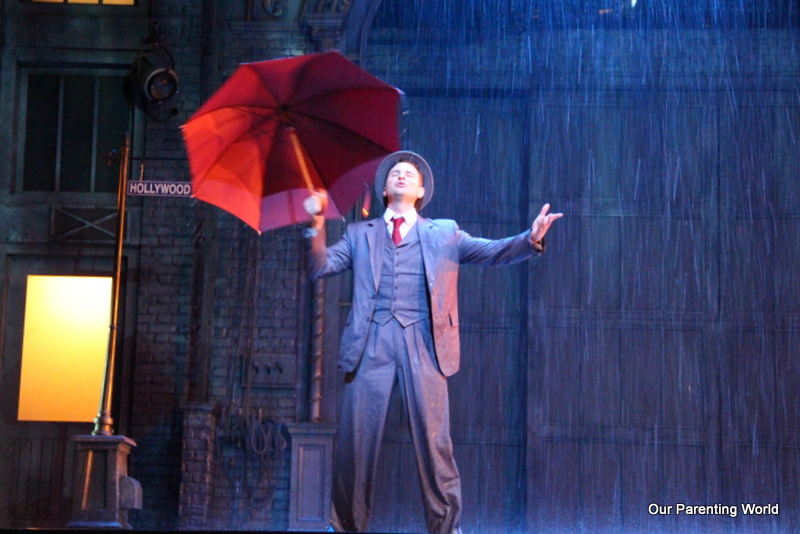 The critically acclaimed, awards-winning hit musical ‘Singin’ In The Rain’ is brought to Singapore by Lunchbox Theatrical Productions. If you think the production company sounds familiar, you are right. This is the same production company that brought to us many of the well-loved musicals like “The Sound of Music” and “Cats”.

This musical ‘Singin’ In The Rain’ was based on the iconic 1952 MGM movie, starring Gene Kelly and Debbie Reynolds. The scene was set in 1927 and the lead male character, Don Lockwood was a seasoned silent movie actor. On screen, he was paired with Lina Lamont, an equally popular female lead character. Their movie production company portrayed them as a pair of lovers on and off screen to increase their popularity. Lina has one fault, which was her voice. She was not able to sing nor speak in a normal tone of voice.

During that period, the silent movie industry was moving away from silent movie to “talking movie” where the voices of the casts were recorded and projected during the movie at the same time. This caused a big problem to Lina as even though she was pretty and charming on screen, she could not speak or sing properly.

Don met Kathy Selden, a part-time performer whom he fell in love with. Due to the poor voice of Lina, the movie production team used Kathy’s beautiful voice to replace Lina’s voice and this made their latest movie a huge hit. Lina tried to claim credit of the movie success but eventually the audience found out it was the beautiful Kathy who was the one singing in the movie. Lina eventually ran away with embarrassment leaving Don and Kathy madly in love with each other. Bethany Dickson the lady in the middle cast as Kathy Selden in ‘Singin’ In the Rain’.

If you think the cast for Kathy Selden in this musical looks familiar, you are right. She is none other than the talented Bethany Dickson who also acted as Maria in “The Sound of Music” performed in Singapore last year. 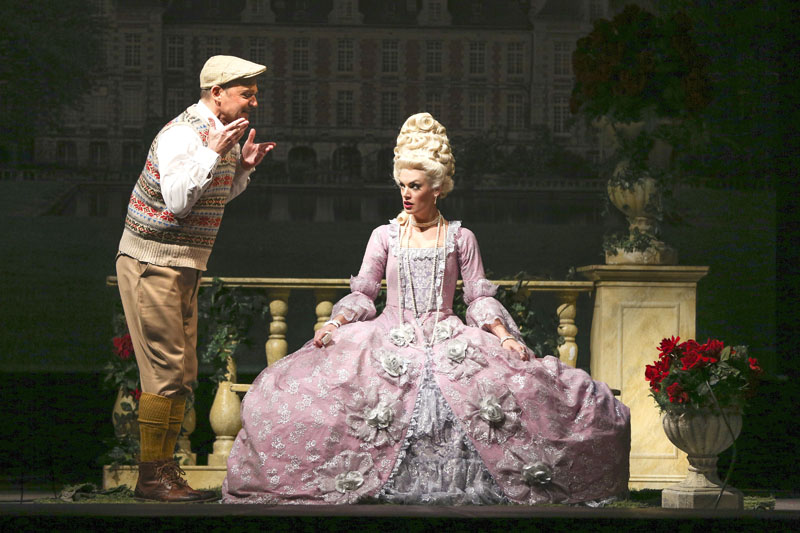 Our Parenting World managed to speak to Taryn–Lee Hudson who was casted as Lina Lamont during the media call. She shared with us her biggest challenge in this musical was taking care of her voice and the need to sing out of tune for her character as Lina. It took a lot of practice and hardwork to act well in that character. Taryn-Lee Hudson is perfect in her role as the bleached blonde flamboyant film superstar, Lina Lamont who will keep the audience entertained and expect to have lots of laughs! A total of 12,000 litres of water was used for the rain effect on stage and the water will be recycled. Each time, the water is filtered and treated to prevent bacteria from developing.

Expect to be wet if you are seated on the first 4 rows, as the singers and dancers on stage will splash water. If you don’t mind being splashed, you can purchase the tickets for the splash zone. A special ‘Singin’ In the Rain’ poncho will be provided if you purchase tickets for seats at the splash zone. You will definitely enjoy the splashes of water from the stage if you are lucky enough to purchase the front row seats early! It is one unique musical where you can get to see real water, continuous rain live on the stage. Audience can be expected to be amazed by the raining scenes as it is a spectacular sight! The charismatic Duane Alexander as above is excellent in his role as Don Lockwood the male lead of the musical, with his great singing and bursts of energy in dancing and splashing the water. It is not easy for him to do the jumps, turns and dance moves on the slippery water with tons of water raining and splashing on him. He performed his solo performances in the rain brilliantly. ‘Singin’ In The Rain’ storyline is easy to follow and the songs are catchy, with high energy dances and dazzling costumes. Be mesmerized with songs like ‘Good Morning’, ‘Make ’em Laugh’, ‘Moses Supposes’ and of course, the classic ‘Singin’ In the Rain’. This is a delightful and cheerful musical, suitable for everyone both young and old.

This is a story about stars with huge egos, demanding film director and producer, fickle fans, classic “golden-era” choreography and comedies which are ingredients of this successful musical. Children and adults will be thrilled to see the raining effects, so much water on the stage, it is an unique and interesting experiences. It is one musical that will leave a lasting impression. Songs from the musical like ‘Singin’ in the Rain’ will sink into you that many audience were heard humming the songs happily after watching the musical including us.