TORUK – The First Flight inspired by James Cameron’s record-breaking movie AVATAR and presented by Mediacorp VizPro is now performing at Singapore Indoor Stadium from May 24 to June 3, 2018!

The story is about TORUK, the central character of the show that will be brought to life as a life-sized puppet, along with Pandoran animals such as the Direhorse, the Austrapede, the Turtapede, and a Viperwolf. TORUK in Na’vi language, refers to the great leonopteryx that rules over the Pandorian sky. This is a mythical tale set thousands of years before the events depicted in the film AVATAR, and before any humans ever set foot on Pandora.

Our Parenting World Team together with the rest of the media were invited to behind-the-scenes to take a look at what it takes to put a spectacular show like this. Our tour guide, Janie Mallet, show publicist show us around and introduced us to the various pops, puppets and costumes.

The show featured brand new creatures of Pandora directly inspired by the movie that have been created according to James Cameron’s specification. These larger-than-life ‘puppets’ like the three Direhorses as above are wild and frisky animals that required two puppeteers to work in unison inside the structure. Cameras have been embedded in front in order for them to see clearly where they are going on stage. The puppeteers have to stand on platform shoes to show the creature’s impressive size.

The Toruk, or Great Leonopteryx  is the fierce and noble Toruk, an enormous marionette with an impressive 40-foot wingspan that is suspended from a cable attached to an automation system that controls the creature’s movements while it is on air and managed by six puppeteers on the ground to control the movement of the creature. Let’s look at some of the headgears and costumes at the quick change area, everything is so elaborate and beautiful all in the process of transforming the human actors to Na’vi. At the quick change area, we were told that the performers have to switch in and out of their costumes in between the show very quickly. As for the costumes, it is not just one shade of blue, a lot of thoughts and efforts have been put into making the costumes with 25 different variations created for Na’vi base. The base skin fabric has optical white synthetic fiber that was silkscreened to create the muscle and distinctive stripes of the characters. 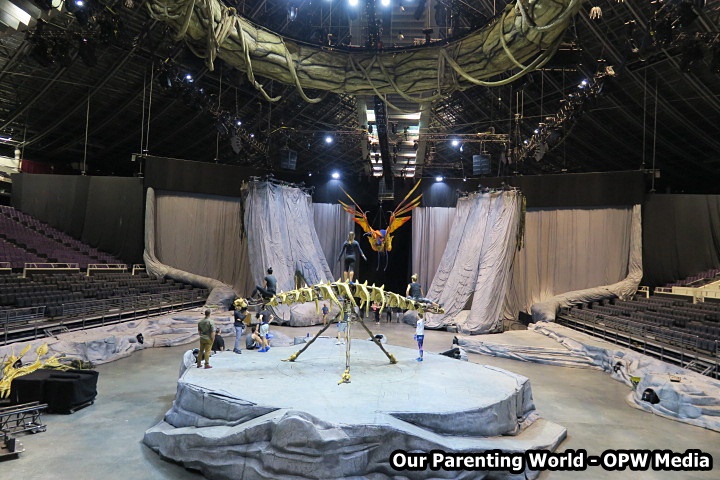 We get to see a rehearsal on the stage during the media tour and we learnt that the cast has to go through many hours of physical training and rehearsals to acquire the strength, physique and agility having to learn how to move and be like the Na’vi. We were in awe when we watched the show, the whole stage has been completely transformed into a visually stunning world of Pandora. A whole new world of imagination, discovery and possibility awaits us in this mythical world! The three main protagonists of the story are Ralu, Entu and Tsyal and they are joined by the Shaman and the Chief of the Omaticaya clan as well as members of five Na’vi clans: Omaticaya, Tawkami, Anurai, Tipani, and Kekunan. The story is narrated by The Storyteller centrals around the three characters, Ralu, Entu and Tsyal. They set on a journey to travel around Pandora to find five objects that will help to prevent a catastrophe that is threatening to destroy the sacred Tree of Souls with the help of Toruk, a majestic flying creature.

Interesting fact that the main characters and cast speak in Na’vi language however, there will be a narrator who will explain in English to the audience what the characters are doing and what is going on. Another interesting thing in the show is that you can participate by downloading TORUK – First Flight app that allows you to be part of the show, simply enter your seating information and follow the notifications to participate in the in-show effect. Make sure your phone is fully charged to enjoy this immersive experience. The acrobatic performances is awesome and the cast look and behave just like the Na’vi in the movie taking into account that Pandora has weaker gravity as compared to Earth. They have to leap, tumble, flips and somersaults the Na’vi way not like a human. 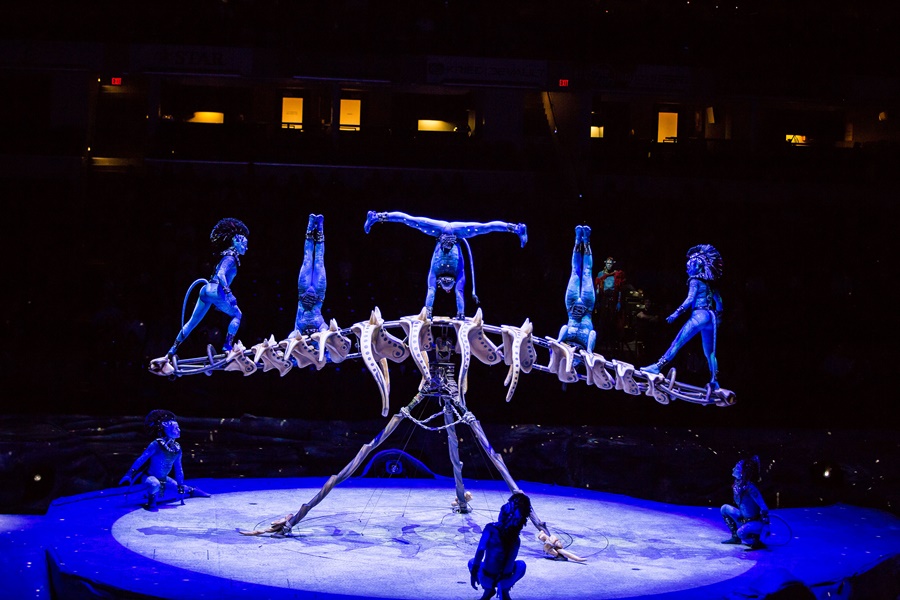 At this scene, the cast demonstrated great hand and body co-ordination having to balance on top of a bare skeleton while it has been rotated and moved up and down like a seesaw. We were very impressed with the special effects from the multicoloured kites that glides gracefully, volcano eruptions, river flowing and to the ocean waves crashing and more. Needless to say, the mind-blowing acrobatic, fantastic choreography and beautiful music are truly impressive! The music has captured the vibe and essence of the Na’vi sound and environment.

We thoroughly enjoyed the show and it was so mesmerizing that we were totally absorbed from the beginning of the show till the end. A must see show this school holidays and hurry, TORUK – The First Flight will be performing at Singapore Indoor Stadium till June 3, 2018! Don’t miss it!