Singapore has achieved another world’s record, this time at Universal Studio Singapore where 605 participants including Our Parenting World’s (OPW) team gathered to play Monopoly and at the same time, celebrated Mr Monopoly, the real estate tycoon, 81st birthday on World Monopoly Day! Monopoly is a board game that originated in the United States in 1903 and over the years, it has quickly become one of the most popular and well-loved games in the world. Our Parenting World’s boys are very happy and proud to be part of this historic event to break the Guinness World Record! 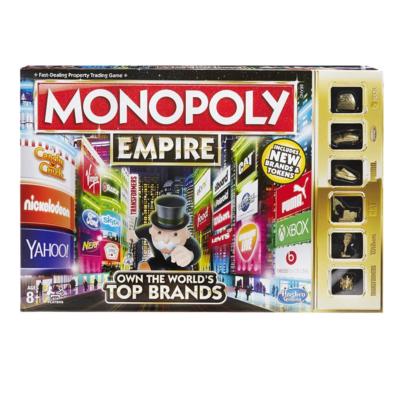 605 participants gathered around tables stretched across the New York and Sci-Fi City zones of Universal Studios Singapore to play the latest MONOPOLY EMPIRE game. Players can own the world’s top brands by travelling around the board buying, selling the world’s top brands and building their empires. Participants can have fun playing and celebrating World MONOPOLY Day, Pass GO and own iconic brands such as Universal Parks & Resorts, TRANSFORMERS, NERF and McDonalds etc. The latest MONOPOLY EMPIRE game, which features for the first time Universal Parks & Resorts as a brand, and limited edition Monopoly game T-shirt are available for purchase at the Universal Studios Store while stocks last. During the event, participants were treated to an exclusive meet and greet with MR. MONOPOLY (above), Optimus Prime and Bumblebee which provided a larger-than-life experience to the event by cheering on the participants. Before the start of the event, the 2 brothers have a feel playing with the latest MONOPOLY EMPIRE game. As participants must be at least 8 years old, the younger brother could not take part but nevertheless, he cheered and supported his older brother and friends taking part in this record breaking moment. All participants taking part in the event must play continuously for 30 minutes from start of the game and play without any break. Once the event has started, older brother played continuously with other players. Congratulations and well done to all the participants! Universal Studios Singapore at Resorts World Sentosa made history on World Monopoly Day by successfully breaking the existing Guinness World Record title for most people playing a Monopoly game in a single venue at 11:16am. It has outdo the previous record set by Wycombe Abbey School with 585 participants in the United Kingdom on 14 December 2015. Universal Studios Singapore at Resorts World Sentosa made history on 19 March 2016 on World MONOPOLY Day by successfully breaking the existing GUINNESS WORLD RECORDS title for most people playing a MONOPOLY game in a single venue. The record was officially broken by Universal Studios Singapore at 11:16am on 19 March 2016 and successfully achieving a Guinness World Record title on World Monopoly Day. Congratulations! Celebrate Easter at Universal Studios Singapore Easter Eggstravaganza from now till to 17 April 2016. Visitors can expect to see lots of eggciting and colourful Easter decorations and don’t forget to take photos with your favourite characters dressed up in their Easter-themed accessories. Please click HERE to find out more. Here from everyone in Our Parenting World team, we would like to wish you a very Happy Easter!