Trending
Gor Gor says:
On the 25 May 2006, I went for my last round of injections. Upon reaching the clinic, immediately I could recognise the clinic and my doctor. I suspected that I would be having injections and started to cry. Everyone tried to pacify me. I would be having not just one injection but two, one on each side of my thigh …. so scary. I was given another dose of Rotarix Vaccine into my mouth.
My weight now is 9.1kg and my height is 71cm. I am at the top three percentile. My head circumference is 43cm.
Mummy went for a meeting recently, her friends told her that I am so big, hee hee … the last time they saw me was during my baby shower, I am very much bigger now 🙂
Mummy says:
Baby likes to crawl so much and he can crawl rather fast. Normally when I wake up in the morning, Puffy, our dog will dash upstairs to greet me no matter where I am. Imagine when I wake up, I saw baby crawling on the floor and when he saw me, he started crawling towards my direction. He was so excited and went yee yee … yah yah all the way even though I was walking towards the bathroom, I quickly picked him up.
Baby and Puffy like to look at each other, both will proceed to touch each other. Baby wants to grab its paws or touch its head. Puffy would want to lick him. Many times when baby look at Puffy, he will keep blabbing as if he wants to talk to Puffy.
When I said baby come here, come here, he will shriek excitedly yee yaa yee yaa … all the way to me. I realise he understands when I tell him to come here, come to Mama. Baby also likes to reach out his hand and examine. He would swirl and turn his hand, I will follow his actions and he will follow mine. He likes to open up his fingers like he is counting them and closed them one by one. I remembered seeing him doing that when he was first born as if he was counting. When he is crawling, he will stop and strike a pose by holding onto his leg as if he is posing, hee hee … that is really funny.
On the 28th of May, baby shaved his hair again and his brushes has arrived. The brushes are made of baby’s hair and comes together with a certificate of his first hair cut. 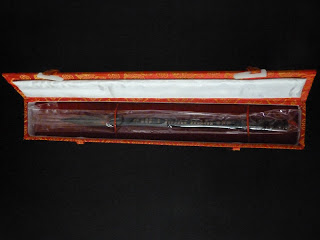 Baby did something new, my mother called out to me to see what baby is doing. He has crawled onto a weighing machine which is placed outside our rooms. The weighing machine has wheels beneath. He placed his tummy onto the weighing machine and started to wheel around so he does not need to make much effort to crawl. Wow, we are so impressed!!
Share. Twitter Facebook Pinterest LinkedIn Tumblr Email