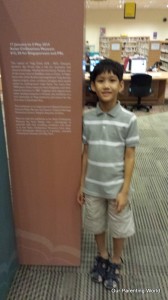 Our Parenting World, Gor Gor and Di Di love to go to the National Library, we are often at the library reading and borrowing books. During one of our visits to the library, Mummy saw that Asian Civilisations Museum is having an exhibition on Secrets of the Fallen Pagoda: Treasures from Famen Temple and the Tang Court till 4 of May 2014. Mummy is very passionate about Chinese history.

Asian Civilisations Museum was having a promotion if you took a picture of its signboard like what Gor Gor did in the above picture. You can show the picture to the reception counter and each picture can admit four guests free.

Gor Gor is familiar with some of the Chinese historical figures and dynasties after watching various historical dramas with Mummy. Recently they watched a Tang Dynasty drama about “Wu Zetian,  武則天”. She is the only woman emperor to rule China in her own right. He is excited to see the exhibits are from Tang Court/Dynasty era. At the museum, Gor Gor and Di Di were busy looking at the display, a tourist saw them and said he wanted to take a picture of the boys as he finds them so cute. The boys were so happy to hear that and happily poise for him to take a picture of them. “Thank you for making our day and hope you have an enjoyable stay in Singapore.” This exhibition is a rare showcase of Tang aesthetics and culture for the first time in Southeast Asia. The treasures were forgotten for more than 1000 years as they were hidden until their chance discovery in 1987. The exhibition also showcases objects from other leading museums in Shaanxi. Beautiful pottery of animals like horses and camels during the Tang era. One of the highlights of the exhibition is the 12 zodiacal pottery animals which are the most common type of grave goods found in Tang and Song dynasty tombs. It was in the Tang dynasty that it became popular to represent cycles of 12 years with animals. The description on the information sheet indicates that these animal-headed figures wear long scholarly robes are apparently human but with an animal head. Our guide told us that this year is the Year of the Horse and the horse figurine is put in the middle surrounded by the rest of the zodiacal pottery animals. 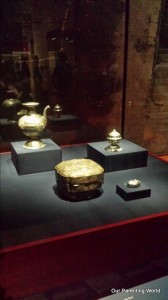 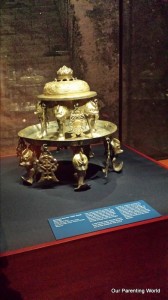 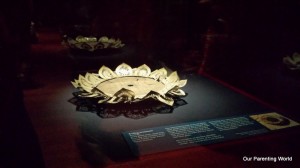 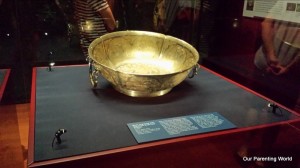 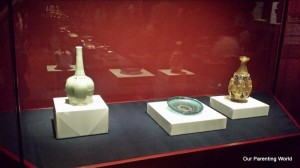 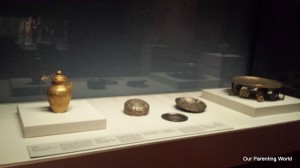 Some of the magnificent Tang dynasty good, silver, ceramics and glass that were sealed underground until they were discovered in 1987. These were more than 1000 years old! Special mention is this Celadon bottle, the glaze of this bottle is widely described as “secret colour” on the inventory stele. “Secret colour” ceramics were widely celebrated in poetry during the Tang and succeeding dynasties. The actual colour is unknown until the discovery of this ceramics. A large underground crypt was discovered in 1987 when The Famen Temple was undergoing repair. This is the inventory stele located at the entrance of Famen Temple crypt which document almost everything found in the temple. Our guide highlighted to us that this painting shows that during Tang era, the noblemen love to ride horse and play games similar to that of modern day horse polo.

Horse polo is a sport played on horseback in which the objective is to score goals against an opposing team. Players score by driving a small white plastic or wooden ball into the opposing team’s goal using a long-handled mallet. The well-preserved mural of the three female attendants of the Tang Court.

Murals of the two female attendants playing with a bird. These three dishes are elegant and delicate inscribed with “official” (guan) in chinese, most likely to be used by the government officials. Can you guess, what is this? It is actually a tea set. From the information booklet, this is a complete tea set found in the rearmost of the Famen crypt. Many monasteries grew their own tea and some even presented it as a tribute to the court. This is part of the most comprehensive set to survive. Not only can they be used practically, they are also a sophisticated, delightful works of art.

Visit The Asian Civilisations Museum. It is the first museum in the region to present a broad yet integrated perspective of pan-Asian cultures and civilisations. Please click HERE to find out more and also the details of its current exhibition.