Singaporeans are all gearing up to celebrate our Nation’s 51st birthday! Our Parenting World (OPW) team celebrates this joyous occasion by bringing together some of the highlights of today’s National Day Parade. National Day Parade (NDP)’s Parade & Ceremony into their 51st year running is set to impress the audience to showcase Singapore’s sovereignty and how our progress is backed by the strength of military, social, psychological, civil, and economic defence. The contingents are made up of Singaporeans from all walks of life ranging from public and private sector organisations, uniformed youth groups, as well as the Singapore Armed Forces (SAF) and Home Team. The NDP 2016 Parade and Ceremony (P&C) segment will feature a total of 31 contingents, comprising 1,424 participants from four Guard of Honour contingents, the Singapore Armed Forces (SAF) Colours Party, the Combined Band, five SAF and Home Team contingents, 10 uniformed youth group contingents, and 10 social and economic contingents. Audience will be taken on an enchanting and colourful journey from Act 1 : Badang and the Singapore Stone which tells a story of the lesser-known legend of Badang, the legendary Singaporean strongman, Act 2: Four Civilisations which celebrates the rich diversity of our culture and the harmony of our people that makes us uniquely Singapore, Act 3: Dare to Dream inspires Singaporeans to dare to dream about the exciting future that awaits. Look out for the beautiful aerial and automated unicorn against a sea of rainbow-coloured lights produced by the audience’s LED wristbands, symbolising the hopes and dreams of our younger generation, Act 4: Ingenuity, featuring energetic dance choreography to represent how Singaporeans are likened to be architects, artists and engineers of the future, Act 5: Building Our Singapore of Tomorrow, look out for the floating city, Sky City, made up of multiple iconic buildings which are up to 6 stories tall, Act 6: Our Home, Our People, the show will feature a song signing segment for the first time in NDP’s history with participants from over 150 special needs participants from seven Voluntary Welfare Organisations hand-signing to a song performance of What a Wonderful World. 420 participants will create an awe-inspiring mass display of changing images which are adapted from the hand-painted artwork of students from TOUCH Community Services. 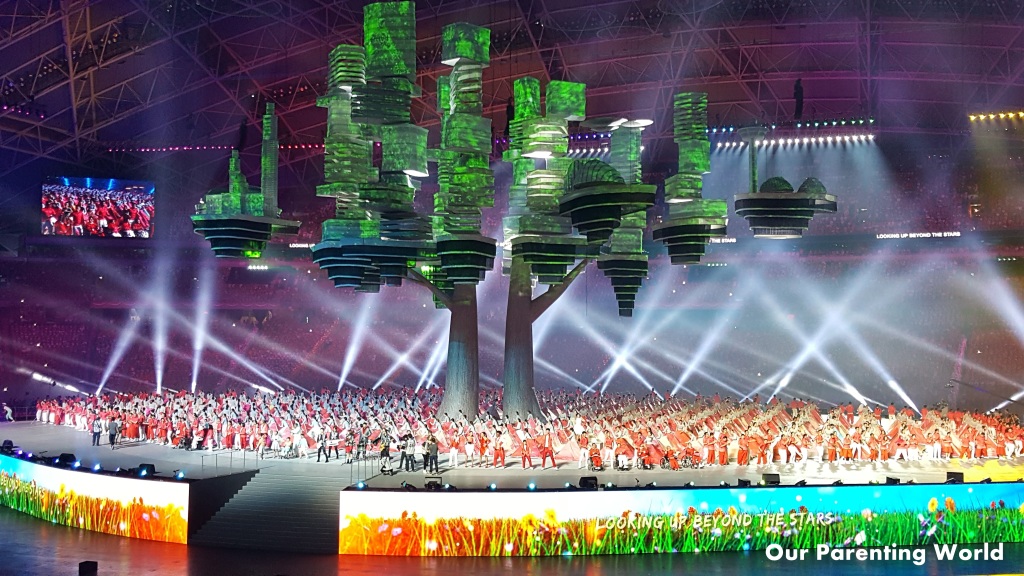 The finale where all the participants will come to together to recite the pledge and sing the national anthem. The Sky City will transform into a giant tree with two tree trunks growing from the stage! The moment that the audience has been waiting for the spectacular display of indoor and outdoor fireworks, alongside with a dazzling array of lasers as well as flame and lighting projections! Outdoor fireworks will start at 8.18pm.

You can also watch the broadcast on www.toggle.sg or local free-to-air channels.

For parade-goers, make your way down to the National Stadium via Stadium MRT, Kallang MRT or Mountbatten MRT. The Gates will open from 4pm and please be seated by 5pm. You’re advised to come early to avoid the huge crowds, and by public transport as carparks will all be closed (check here for the road closures). No admission is allowed after 6.30pm.

You can check out the NDPeeps Facebook page while waiting for the show to start to catch an exclusive look at what’s going on behind-the-scenes live!

This article is brought together by the team of Our Parenting World, media for National Day Parade 2016.